5 Top Places To Visit In Tunisia

What is Tunisia known for?
It is perhaps most famous for its wide array of historical attractions, including the ancient city of Carthage in Tunis, and the huge Amphitheater of El Jem near Sousse, which show off the influences of various civilizations that have settled in the country over the years.
And before going to the country you should know 5 top places to visit!
This is North Africa wrapped up into one bite-sized package.

There are alleyways of pastel-washed houses and crowded  streets to explore in the cities. There  are ancient ruins to discover out in the countryside. Moreover, the vast desert expanse of the Sahara to the south with its sweeping dunes, craggy mountains. 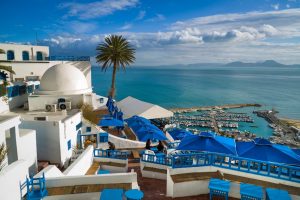 One of the most popular things to do here for tourists is simply kick back with a cappuccino and enjoy watching the world stroll by.

Djerba is an island in south Tunisia with beautiful sandy beaches and beautiful, peaceful and silent countryside.  It is one from the best ecological destinations in the world. Moreover, this island preserves its traditions and its unique architectural theme.

The town of Douz is like a curtain for the wonders just to the south. Driving through the compact, narrow streets of the center, you’ll wonder what all the hype is about. 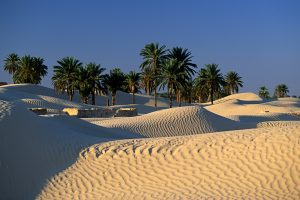 It’s only a stone’s throw from Douz to the vast sand plains of the Jebil National Park – one of the magnificent natural wealth of southern Tunisia. So, it’s not for nothing that this distant city in the south is thought to be the access point to the Sahara.

Tozeur is a city in Tunisia. Her architectural style is unique, playing with bricks of sand and clay. The women wear black robes with a bright blue band, unlike those from Nefta to the south with white bands. 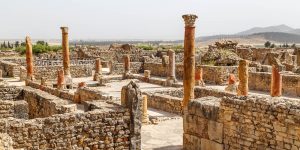 Bulla Regia is an important archaeological site in the northwest of Tunisia. The region became part of the Roman Empire in the first century CE. It prospered by providing agricultural products such as wheat, grains, grapes, and olives to the rest of the Empire. The public and private architecture and ornate decoration of the province’s cities, including Bulla Regia, reflect this prosperity.

And if you have decided to visit Tunisia, make a call to Fun Travel Armenia! We’ll do our best to make your vacation unforgettable!

PrevPreviousHow Much Does A Vacation in Crimea Cost?
NextWhat Is The Cheapest Month To Fly To Egypt?Next