The Tatev Monastery is a 9th-century Armenian Apostolic monastery located on a large basalt plateau near the village of Tatev in the Syunik Province in southeastern Armenia. The monastic ensemble stands on the edge of a deep gorge of the Vorotan River. Tatev is known as the bishopric seat of Syunik and played a significant role in the history of the region as a center of economic, political, spiritual and cultural activity.

The Monastery of Tatev has been described as one of the two best-known monasteries in Armenia, along with Noravank in the province of Vayots Dzor.

In the 14th and 15th centuries, the monastery hosted one of the most important Armenian medieval universities, the University of Tatev, which contributed to the advancement of science, religion and philosophy, reproduction of books and development of miniature painting.
Tatev Monastery has played a notable role in the advancement of cultural life of Armenia.
The Monastery hosted a university that operated between 1390 and 1434, where instructors were educated and trained not only for the province of Syunik, but also for other regions of Armenia.

The cableway from Tatev to the village of Halidzor, which was opened in October 2010, It was included in the Guinness World Records as world’s “longest non-stop double track cable car”. 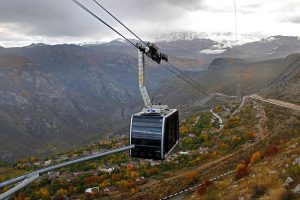